If, up until this point, your life experience had only included acts of “fun”that brought you a sense of satisfaction that made life worth living then wipe the crusty residue from your septum and affix your looking sockets to this page.

In their ABSOLUTE MOST FUN SHOW TO GO TO, OperaFeHk will dazzle all your orifices with a performance of hitherto unseen of complexity and untouchable hilarity. Your previous experiences shall pale in comparison and the suffering that was once wrought shall be expunged like an impassioned plea for rational discourse from a website’s comments section.

The tall tale of the show is that the collective’s chief protagonist, a house with hippopotamus legs, has been cast singing the lead role in my new opera. During the overture, the conductor makes a series of unholy changes to the score: the flute is replaced with a whistle, the viola is replaced with a banjo, and the oboe is replaced by a whoopie cushion. Incensed that his changes don’t create spontaneous brilliance, the conductor storms off stage. When he returns, his baton is poking out of his chest and he collapses in a heap of ego. At this point, the opera becomes a murder mystery and the two leads set out to unravel the mystery of who killed the conductor. 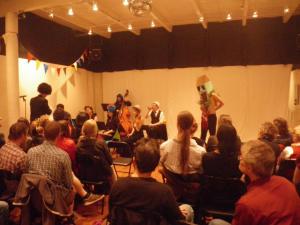 The most obvious suspects are the instruments who were recast during the overture. The viola is interrogated, but she was too manically depressed to motivate herself to lash out; the flute was… too high; and the oboe confirms her status as a diva who wouldn’t stoop to such barbarism.

After unsuccessful, yet hilarious interrogations, the conductor miraculously comes back to life and accuses the composer of committing the crime!

spread the word! share this tasty morsel with friend and foe: